Home >
About > Our Patron 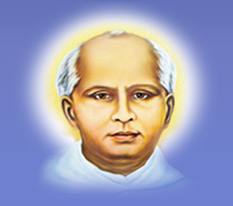 Kuriakose Elias Chavara was born on 10' Feb. 1805 at Kainakary, near Allappuzha, Kerala. He attended the village school under the guidance of his first Hird„, teacher (Alan). At the age of 13, in 1818 he entered the seminary where Malpan Thomas Palackal was the Rector. He was ordained priest on 29th November, 1829 at Arthunkal.

On 11th May, 1831 he laid foundation stone for the first CMI house congregation. On 8th December, 1855 he made the religious profession along with other 10 companions, under the name "Kuriakose Elias of Holy Family".

There is no area of human Endeavour where the fingers of Chavara have not touched. To his credit there are many firsts in the history of the Kerala Church: the first indigenous religious congregation for men (C M I ), Sanskrit School, the catholic printing press, the Indian congregation for women( C M C ). He was first to edit and publish the East Syrian Breviary. He prepared the first liturgical calendar in the Malabar Church in 1862 which continued to be in use until the recent years. It was through his efforts Syriac was first printed in Kerala and the first prayer books in Malayalam were printed at Mannanam under his care.

He was appointed as the Vicar-General of the Syro-Malabar Church by the Arch-Bishop of Verapolly in 1861, when a schism threatened the Church of Kerala. He was the pioneer of popular education in Kerala and the one who inspired the Catholics to start schools in every parish along with their churches. That is why in Kerala schools are popularly called "Pailikkoodam" - a place for education attached to the church.

He died on 3"i January, 1871 in the odor of sanctity leaving behind him the high reputation of a very holy monk. He was declared Blessed on February 8, 1986 by His Holiness Pope John Paul II and now he is on the way to sainthood.

CMI VISION OF EDUCATION is to form leaders who are intellectually competent, spiritually mature, morally upright, psychologically integrated, who will champion the cause of justice, love, truth and peace and who are ever open to further growth.
"To enlighten and enrich the little minds to be a proper human being to serve the society and the world at large."